So you’re headed out for a family vacation or a weekend alone in the woods. But how do you make food? We’ve been camping for over 15 years and these are my best camp fire cooking tips.

When you’re setting up your fire you need to select the best location for the area you’re in.

If you’re in a campground or camping area that provides fire pits or fire rings be sure to utilize them.

If you’re on the trail or in a primitive camping area look for flat ground covered with gravel or dirt. Clear away any flammable material from around the area where you’ll cook.

If you’re in a grassy area you can lay down aluminum foil to prevent the grass from burning. Make the foil area larger than the rock circle you create to cook in. This prevents the fire from spreading to the grass.

Low and Slow is the Way to Go

Campfire cooking is best done on indirect heat. Resist the temptation to cook over the flames of a newly created fire.  Unless you’re looking for burnt marshmallows, cook over red hot coals rather than flames.

Foil Can Be Your Friend

In the most primitive of wood fires (where no cooking grate is present), tinfoil can be your best friend. A nice sized potato double or triple wrapped and buried in the coals will yield excellent results. You can generally tell by the squeeze of the potato when it is soft to your likeness. The thing to avoid is overcooking and burning, so check them frequently and make a note of the approximate time. You can always re-wrap and put it back in the fire if it is undercooked.

Foil packet cooking can be a simple way to make meals over a primitive wood fire (one with no cooking grate). One of my favorites is Campfire Banana Boats as come call them.

And, here are some other great foil packing cooking recipes.

The simple ideas are of course, a stick whittled down for hot dogs or marshmallows. Bring along Graham Crackers and chocolate for traditional S’mores. We love these homemade marshmallows with our S’mores.

We can’t talk about campfire cooking tips without talking about cast iron. Cast iron is one of my favorites both outdoors and in. In fact, most of my cookware is cast iron. It’s easy to care for, easy to clean (when well seasoned) and non-stick without chemical coatings.

If you’re not a fan of aluminum foil touching your food I recommend investing in a dutch oven for campfire cooking.

When you’re packing for your outdoor cooking you’ll want to have the right supplies. Here’s a list of some things you’ll need:

If you’re looking for more tips and great recipes for campfire cooking check out the Cooking Outdoors ebook and video package which is on sale now. 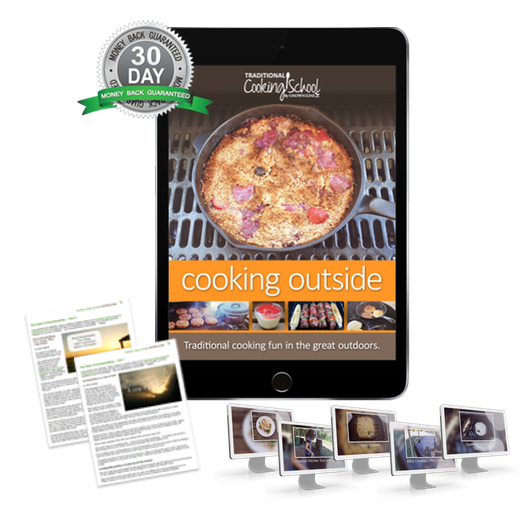 Not the healthiest option but still, I had made marshmallows!

The key to a marshmallow holding up to the flame is that is must be firm. The firmness comes in two ways: gelatin and mixing time.

What makes these homemade marshmallows healthier? No white sugar. Instead of using sugar I use honey. While the majority of health benefits are diminished due to boiling, local honey is still a preferred alternative to chemically processed sugar.

Grease a 9×13 pan with coconut oil or line with parchment paper.

Mix gelatin and 1/2 cup water in a large mixing bowl and stir gently. Set aside. In a small sauce pan, combine remaining water and honey and heat until boiling. If using a thermometer the honey should reach 240-degrees. Otherwise, boil approximately 9 minutes. Stir constantly.

Once done, slowly pour honey into mixing bowl with gelatin which will be stiff. Once added, blend on high about 15 minutes until medium peaks have formed. ( A medium peak will hold form but the very tip will curl.) Add vanilla in the last few minutes of blending. This will end up a bit like Marshmallow Fluff.

Working quickly, spread the “fluff” into your greased or lined pan. Cover with towel or wrap and let sit overnight.

Once set, cut into pieces with oiled pizza butter or cleaned and well-oiled scissors. Store in an air-tight container.

Additionally, you can dust with powdered sugar before storing to keep them from sticking.

No matter if it’s healthier camping foods you’re looking for or just an alternative to store-bought marshmallows, these guys are sure to please.